On Oct. 18, 2016, the first SAME Post Issues Workshop was hosted by the Tulsa Post and brought together public and private sector professionals from throughout the local area to address challenges associated with water infrastructure, including safety, water supply and funding.

SAME Post level workshops are intended to utilize Sustaining Member Post memberships and local government relationships to collaborate and resolve issues at a local level. The intent is to operationalize solutions right where they can be implemented and report back the impact of those solutions. For those topics requiring further action or more national input, Posts will forward them to SAME National for consideration at the national level.

The foundation of SAME is its 105 Posts throughout the United States and overseas. These Posts are engaged at the local level with military, federal, state and community governments. Supporting the challenges these agencies face directly impacts economic, safety and security issues where an immediate impact can be made.

A Call for Papers (Issues) was sent out to the entire SAME membership in December 2015. The National Office received 17 submissions. A webinar was held for Posts to explain the process in March 2016.  SAME attempted to match submissions with local Posts; approximately three Posts followed through with contacting submitters.  The first Post to conduct an Issues Workshop was the Tulsa Post in concert with the Tulsa District of the U.S. Army Corps of Engineers (USACE), with the effort led by Col. Miro Kurka, USA (Ret.), the Tulsa Post Program Chair and Vice President, Water Resources Group Leader with Mead & Hunt.

The inaugural workshop was held at USACE Tulsa District’s headquarters with 29 people in attendance.  Attendees were engineers, business developers, large and small businesses, men and women.  The Omaha Post also sent two individuals to attend. There were five people on the panel.  The Tulsa Post opted for a panel format with slide presentations.

This timely event consisted of “The Issue of Aging Infrastructure and Limited Resources,” presented by Col. Kurka; “Restoring Waurika Lake to a Resilient Regional Water Supply,” presented by Dan Keithline, of Keithline Engineering; and a project briefing on gate rehabilitation projects presented by Chris Struck of USACE Tulsa District, followed by a panel discussion.

Future workshops should be less “panel” focused and more discussion focused.  SAME National can suggest room-sets and enhance marketing efforts.  Workshops also can spend less time on the details of a particular project and more time discussing examples and best practices as they relate to a particular issue.

SAME wants to share the results of the workshop and lessons learned with other Post Leaders so that these workshops will become a regular occurrence, with issues reported back to and tracked by SAME National to be shared with national Leadership, including the Engineering Service Chiefs.

In fact, in September 2016, SAME National held a CEO Roundtable at the Army and Navy Club in Washington, D.C., with senior industry and government leaders, including the Engineering Service Chiefs. In the future, the Post Issues Workshops will play a role in supplying content/issues for the annual CEO Roundtable. 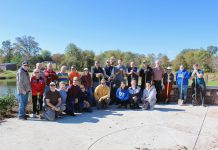 Fisher Sworn in as 99th SAME President at JETC in Kansas...

Need to Know your Market? Come to JETC!