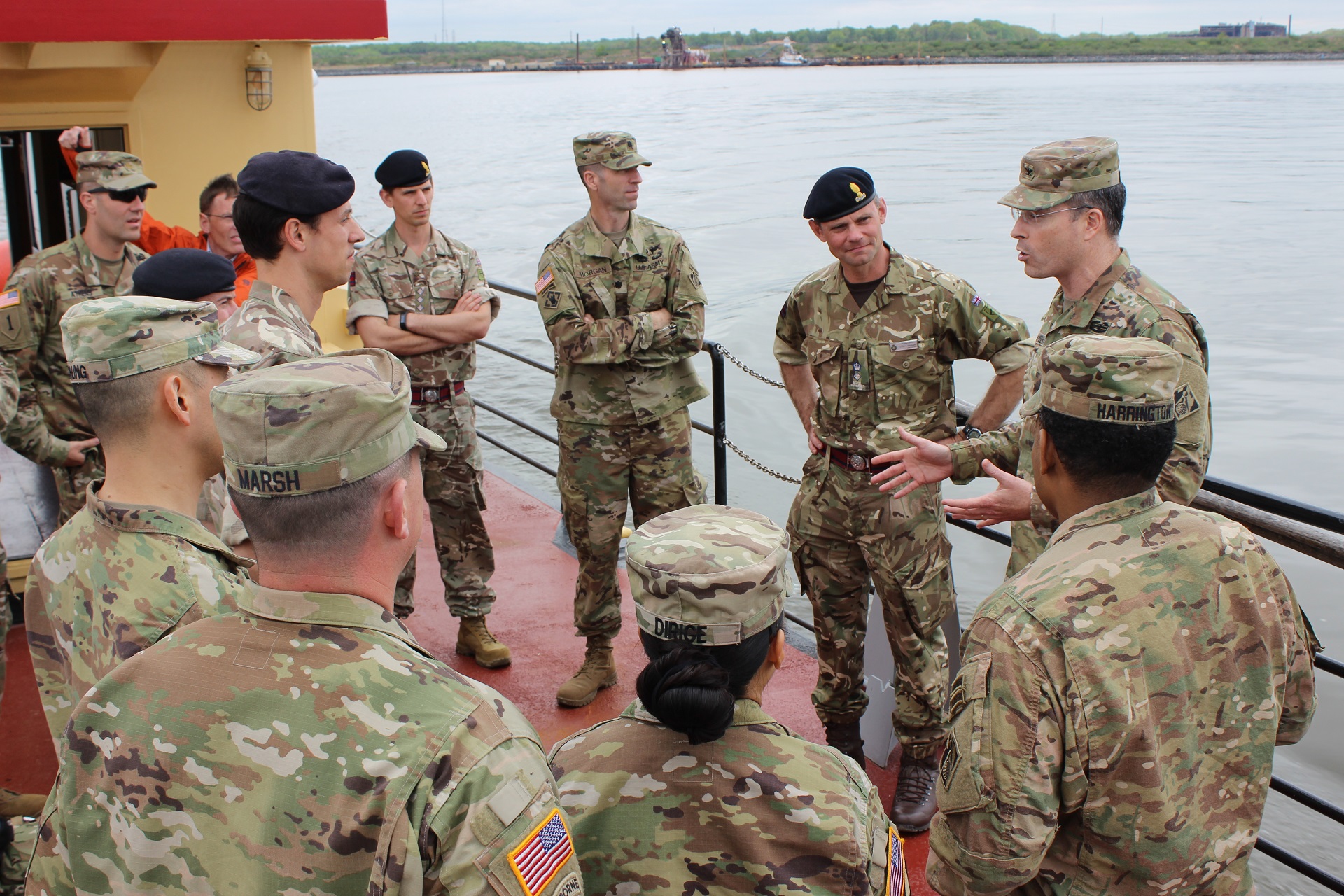 For years, U.S. and British forces have fought side by side in operations around the world, most recently in Iraq and Afghanistan. This relationship extends within the military engineering components as well through a partnership between the British Army’s Corps of Royal Engineers (RE) and the U.S. Army Corps of Engineers (USACE) to encourage professional development, camaraderie, and cultural exchange.

USACE Baltimore District has been hosting RE officers stateside for nearly a decade, offering British officers the opportunity to serve with one of USACE’s largest and busiest districts. This Professional Engineer Training (PET) Program benefits both the British officers, as they pursue professional certification, and also the officers, non-commissioned officers, and civilian employees of Baltimore District who are able to learn some of the different approaches and solutions to challenges that their counterparts bring across.

Through the PET Program, RE officers work within USACE for a total of 17 months as part of the two-year training that is run by the Professional Engineering Wing of the Royal School of Military Engineering (RSME). The training is designed to enable the officer to become professionally registered as a Chartered Engineer, which is the British equivalent of a Professional Engineer certification in the United States. The officers work specifically in construction management and engineering construction design roles, gaining high-quality experience they would otherwise be unable to obtain within the RE. Other RE officers going through the program are assigned to commercial firms working on large infrastructure projects, often in London, and other parts of the United Kingdom or Australia—but the Baltimore District assignments are unique in that they are the only ones in the United States and the only ones with a military organization.

PET graduates need to be able to command a Specialist Team of engineers, which is effectively a consultancy group headed up by a RE major but able to deploy anywhere in the world and design, procure, and contract manage construction.

In addition to being fully incorporated into the district’s construction and engineering divisions, working in the field and back at headquarters, the students are required to write a number of academic papers. They have to complete attachment experience reports, in which they articulate the engineering lessons they have learned. They have to produce technical and managerial reports in which they have to research an engineering subject, providing critical analysis with the intent of demonstrating professional and technical understanding. And, the officers have to write a thesis containing similar analysis of a construction engineering subject. These papers form part of the master’s degree that the students work towards throughout their time with USACE.

While the RE has been able to place officers with Baltimore District since 2009, the British Corps has a historic association with the rest of USACE that goes back much further. The current arrangement with USACE dates back to 1967 when Capt. David Philpott, RE, deployed to the United States as part of “No. 14 Long Civil Engineering Course.” Since this time, the program has run almost continuously and has enabled RE officers to gain highly valued experience within USACE as well as building positive working relationships, developing interoperability capabilities and improving understanding all round. The program was initiated after the RE acknowledged there was a need to place British officers in organizations undertaking large scale, complex, commercially and technically demanding engineering construction projects in order to improve their effectiveness as Chartered Engineer professionals deployed on operations. USACE has been able to accommodate RE personnel with huge success in terms of both experience gained and qualifications achieved. In so doing, it is hoped that the placed officers are also able to contribute positively to the delivery of USACE’s projects.

In years past, RE officers were assigned to various USACE districts but in recent years Baltimore District, which is considered a “full-service” district with personnel supporting all of the Corps’ missions, has become the primary assignment.

Though the PET partnership is primarily for RE officers developing in the United States, USACE officers do occasionally participate in professional development overseas with the RE.

Baltimore District welcomes new British officers each spring and quickly integrates each officer into one of the Construction Division Resident Offices and aligns them with a large complex project that matches their technical specialty and interest. Each officer normally serves as a project engineer and assists with the overall construction management of contracts, working alongside district staff and leadership. After approximately six months of experience in the field, the officers move to the district’s Engineering Division in Baltimore. The officer is hosted by a technical engineer with similar background in a design branch. It is during this time that the officers complete the technical reports and thesis.

The program benefits both the British officers, as well as Baltimore District projects. Recent program graduate Capt. Alan Kukielka, RE, spent the first portion of his assignment supporting the East Campus Integrated Program Office, a large construction effort at Fort Meade building several large facilities and associated infrastructure for the intelligence community. He assisted with contract oversight and construction management. Currently, Capt. James Regan, RE, now has the assignment of support to the East Campus work. And Capt. Jim O’Callaghan, RE, is providing support to construction offices at Fort Detrick where Baltimore District is working on a massive, complex laboratory project for the U.S. Army Medical Research Institute of Infectious Diseases.

While working at district headquarters, British officers are exposed to various USACE projects to help build an understanding of other missions they were not directly involved in during their details at the construction offices. Examples include dredging and maintaining safe navigation for ships going in and out of Baltimore Harbor as well as ecosystem restoration work. Exposure to these missions is unique for the British engineers, whether it is the construction at installations or the water resources and infrastructure missions like dredging and flood control. Back home, the work is just military engineering, instead of civilian or domestic functions. Much of their core requirements tend to be combat support.

In addition to the professional development benefits, the program provides cultural exchange benefits and further strengthens the bonds between the American and British armies. Over the 50 years since 1967, it is estimated that 90 RE officers have had the opportunity to work with USACE to further develop their professional engineering capabilities.

Baltimore District is proud to play host to its engineer counterparts from across the pond and looks forward to continuing this unique and beneficial partnership going forward.

[Article first published in the January-February 2018 issue of The Military Engineer.]