Built in 1944, Eareckson Air Station is located at the western end of the Aleutian Islands of Alaska on Shemya Island. The region, home to various military missions essential to national security and aviation safety across the North Pacific Ocean, also is infamous for its continuous harsh weather, including dense fog, strong winds, rain, and snow, which makes maintaining and operating military installations a challenge.

Eareckson Air Station relies on a 75-ft by 320-ft fuel pier, where at least two barges dock annually to deliver fuel and supplies. Situated at the only viable location on Shemya Island, the pier is unprotected from the Bering Sea’s impressive 900-mi fetch— the area of ocean surface over which wind blows in a constant direction, generating waves that increase in height. At Shemya Island, crashing waves have been recorded as high as 20-ft above the pier. Without a breakwater or protective harbor, this exposed cellular steel structure has faced nearly 80 years of storm battery, only sustained by at least five repair and rehabilitation projects. A comparison of historical as-built documentation to recent field notes reveals discrepancies likely indicative of field adaptations made as a result of changed conditions—a common occurrence in the Aleutian Islands where deterioration of facilities is further hastened by the region’s extreme weather.

In February 2020, yet another brutal storm caused significant damage to the fuel pier. Powerful waves stripped off nearly the entire eastern berthing face, spilling its structural fill. A series of three gaping holes were left behind at the northeast, southeast, and northwest corners, opening the door that protected the structure’s core from the open sea. Initially, a team of airmen mobilized to perform site cleanup while the government contracted with Appledore Marine Engineering to perform an engineering analysis of the damage. Appledore Marine then teamed with Brice Engineering, which performed logistics, a terrestrial survey, and provided heavy equipment.

The goal of the engineering analysis was to assess the damage and inform the scope of work for a fast-track design-build short-term repair of the fuel pier. Time was of the essence. With no protection from the intense forces of nature that are well known across the Aleutian Islands, this mission-critical fuel pier remained at risk of further damage from subsequent storms. Without a functioning pier to receive fuel and supplies, base operations would come to a halt. 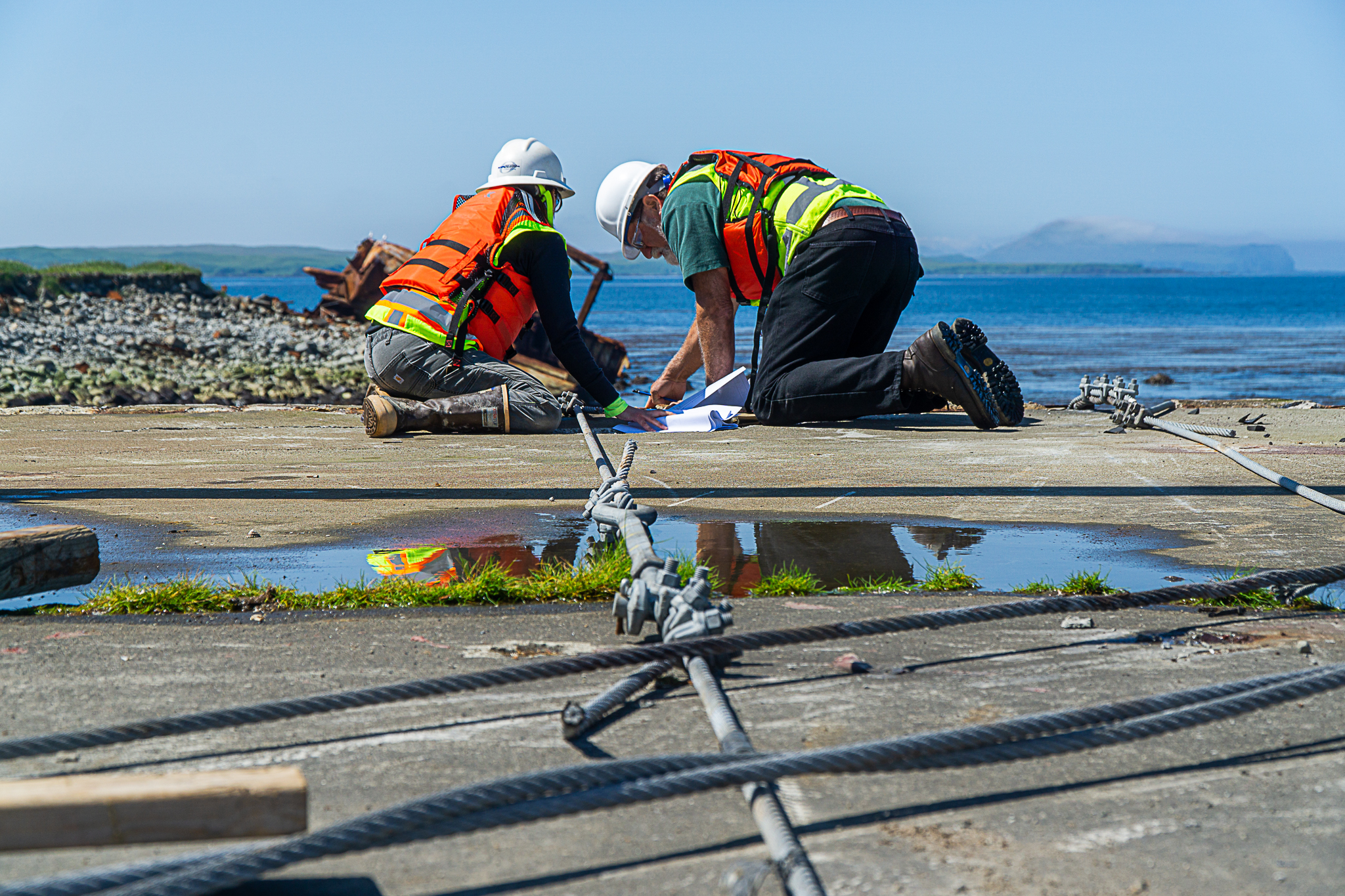 In February 2021, Brice and Appledore Marine collaborated again to complete the design-build short-term repair of the fuel pier, along with Global Diving & Salvage. The goal of the project was to repair the pier to keep it functional for at least 48 months until a longer-term solution could be implemented.

The team had only three months to complete the design, obtain approvals, and fast-track materials procurement, and another six months to mobilize and complete field construction. Had the pier been located in the Lower 48, repairs may have been as simple as installing sheet piles at each

of the gaping holes. But when working on Shemya Island, obvious solutions are quickly tossed aside in the face of multiple site-specific design constraints.

Faced with myriad design constraints, supply chain impacts from the pandemic, and related safety protocols, the design-build team worked with the U.S. Army Corps of Engineers and the U.S. Air Force to define the methods to overcome each design constraint.

The design-build team combined specializations in waterfront engineering, remote construction and logistics, and underwater construction. This know-how was key to identifying the appropriate design solution: the use of readily available concrete and grout bags, plus field fabrication of steel plates, none of which required special equipment.

The use of these materials as core structural elements has been proven time and again at waterfront facilities nationwide, demonstrating that complex environments do not need complex solutions. Practical is best when working in remote and austere locations— knowledge that comes only with years of engineering practice combined with boots-on-the-ground experience.

Because structural repairs at the northwest corner of the pier could not be fully vetted until construction mobilization, the team developed two repair concepts that could be implemented depending on the actual conditions. Once onsite, the team rapidly modified the two original designs to avoid construction delays. The remote location meant extremely limited options for bringing in additional materials; instead, the materials were combined from both concepts into one hybrid concept using materials already on hand. Ultimately, the most difficult aspect of the project was ensuring construction safety. A dual set of cranes moving people and objects as heavy as 5,000- to 10,000-lb from land to water and water to land, commercial divers performing underwater inspections, welding, and hammering, and ever-changing weather and water conditions made for high-risk field work. A full-time site safety and health officer certified in crane operations was assigned to the project as well.

In total, work was completed with zero safety incidents despite the complex and dynamic conditions of the remote and austere Shemya Island environment.

The success of the fast-track short-term fuel pier repair at Eareckson exemplifies the value of design-build delivery—the only method appropriate for this fuel pier’s austere location. The close working relationship between the designer and builders resulted in a flexible solution that met the challenges of this remote site within the original schedule.

Through a culture of proactive collaboration between designers and constructors, details, issues, and challenges that were encountered were worked out in real time to ensure constructability of the repairs during the design phase. This led to a strong working relationship that carried into the field where the team successfully adapted plans and methods weekly, if not daily, to the dynamic site conditions of Shemya Island.

Noah Elwood, P.E., M.SAME, is President, and Lukian Harris, P.E., is Structural Engineer, Appledore Marine Engineering. They can be reached at nelwood@appledoremarine. com; and lharris@appledoremarine.com.

[This article first published in the May-June 2022 issue of The Military Engineer.]

Streamlining the Delivery of Radiological Remediation

Lessons Learned from the Shiplift Expansion at Coast Guard Yard

Building for a Resilient Future

Ushering in a New Approach

An Integrated Approach to Groundwater Remediation