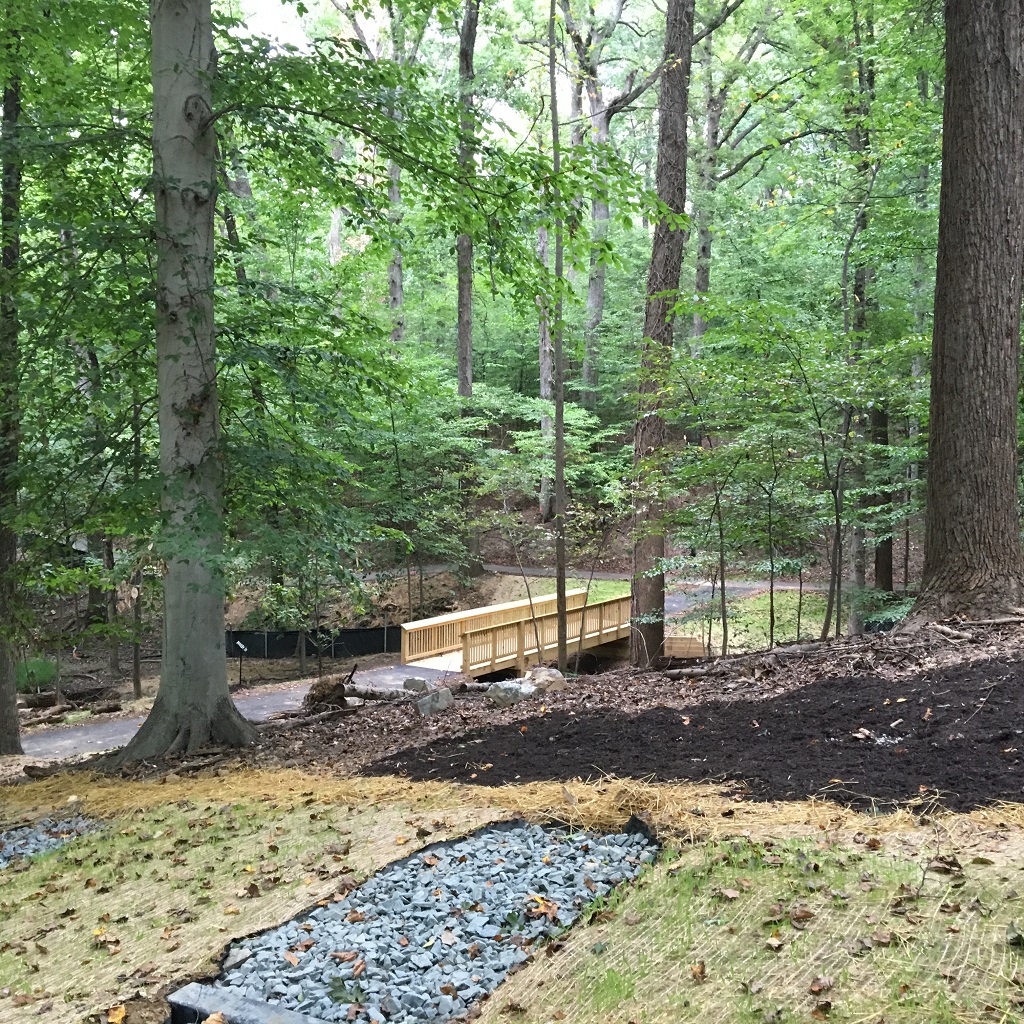 In direct support to the healing process employed at Walter Reed, CDM Smith performed a $1 million design-build project for a nonprofit, The Institute for Integrative Health, to transform a woodland into a healing garden called the “Green Road” Project. Today, the Green Road is a 1.6-acre urban parkland offering a natural healing environment for those who have returned from war.

CDM Smith worked with Capt. Fred Foote, USN (Ret.), a retired neurologist now with The Institute for Integrative Health, to apply for and win a grant from the TKF Foundation. TKF is a philanthropic organization dedicated to supporting the development of urban green space to promote the healing power of nature.

During the design charrettes, it was made clear that wounded warriors want to learn to be self-sufficient again and not be a prisoner to their challenges. With this in mind, the Green Road was designed and constructed to allow wounded warriors, friends and family to experience nature in the middle of this hospital campus.

Part of the project was a communal pavilion near the stream that encourages congregation and kinship, and includes a handicapped accessible restroom and supporting utilities. A separate open and airy commemorative pavilion and fountain at the hilltop portal entrance welcomes wounded warriors to view the site and promotes the healing and grieving process.

A streambed restoration along Stoney Creek, using rock and fallen native beech trees, facilitates connection with the stream and nature, using the healing power of the sounds and sights of this flowing body of water. A wheelchair/walking path connects these features to the Walter Reed campus pathway, and encourages pedestrians to transit through rather than around this green space.

Today, the Green Road is a 1.6-acre urban parkland offering a natural healing environment for those who have returned from war.

The Green Road path runs adjacent to the forested streambed and wetlands, across a wooden pedestrian bridge, and connects to a council ring made of large native stone that is situated within earshot of the stream. The entire site includes landscaping incorporating native plantings.

Groundbreaking came in February 2016 and a ribbon-cutting ceremony followed in September 2016. The Green Road will be used by Walter Reed clinicians as a part of the wounded warrior healing regimen, and by researchers to scientifically measure and quantify the direct benefit from exposure to a natural environment during the healing process. The hope is that the research phase will indeed yield proof positive that “nature heals.”

[Article first published in the November-December 2017 issue of The Military Engineer.]

And the Water Keeps Rolling Along

America’s Counties and the Importance of Infrastructure