Engineering is a profession of innovation, and from its beginning, SAME offered a platform to trade ideas, explore new technologies, and engage in healthy discourse. Articles on everything from a way to transmit pictures over a wire service—an early forerunner of television—to microphotography of rifle bores to advances in the art of camouflage (written by famed golf architect and British military engineer Alister MacKenzie) found a place in The Military Engineer, available to all those with an interested mind and service to the nation.

Dr. MacKenzie actually published two companion articles in TME in the 1930s—one entitled Common Sense of Camouflage Defense; the other, Common Sense of Camouflage Attack. Both looked at the application of camouflage during the Great War, including where it was successful and where it was not. Dr. MacKenzie, who would design Augusta National Golf Course in Georgia and Royal Melbourne in Australia, was a major in the British Royal Engineers and served in World War I as a camoufluer (camouflage officer). One can certainly draw a conclusion that he leveraged his expertise in the art of camouflage (deception, disguise, and obfuscation) in creating the golf courses he designed. More than any other sport, golf relies on “traps,” both real and perceived, to protect the course and imperil the golfer into mistakes.

As camouflage was a relatively new innovation during the World War I-era, so too were “mobile” cameras. An article in TME from 1926 described a new type of camera that could effectively take a moving photograph of the inside the bore of a rifle. What was most prescient, however, was how the article described the additional potential applications of the technology.

“The development of this camera represents one of the many interesting applications of the periscope principle. The war has made everyone familiar with the periscope as developed for use on the submarine, but it is not generally understood that this type of optical system has had many other interesting applications for civil as well as military purposes. The surgeon has long been familiar with the use of the periscope for examining the throat or other body cavities.

Frequently, large castings such as steam turbine housings have extensive interior surfaces which must be machined. It is now the custom to examine these carefully with a periscope before any work is done on them. Before this was the case, a great deal of time and money might be expended upon a piece only to discover that it was all wasted because of the existence of a blowhole in a critical position. The use of periscopes has been proposed to permit the engineer to read the water-gage on a tall water- tube boiler from the furnace floor. In fact, this last illustration is but one of many in which a man’s efficiency and convenience may be increased by a periscope which enables him to see a remote mechanism without changing his position.”

It was evident throughout TME‘s coverage in its early years that investments in, and inventions for, military engineering either directly to support World War I efforts or in the post-war years would have wide usage beyond the needs of just the military. This was the type of connection between government and industry that collaboration through SAME helped foster.

As explained in the July-August 1920 edition of TME: “The engineer in civil life can learn the practical side of military engineering only by contact and association with those engineers, both civil and military, who have learned the game by actual practice in war or peace. And the engineer in the regular service can avoid the narrow development, which so greatly restricts his usefulness, only by contact with engineers in civil life. Mutual confidence and efficient cooperation are possible only if we are all well acquainted.”

As the 20th century went on, research and development investments for military use continued to have civilian and commercial application—often these developments would find even greater use and adoption than their initial military intention.

The Internet, which dates back to the development of packet switching and research commissioned by the Department of Defense in the 1960s to enable time-sharing of computers, is perhaps the most well-known example of government innovation becoming common technology in daily life. Others include Sport Utility Vehicles, Global Positioning System, and of course, nuclear power.

“Photographing the Bore of a Rifle” | TME, November-December, 1926

SAME Foundation: Paying it Forward in Our Second Century 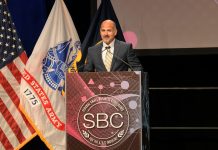 Century Book Excerpt: Why We Were Formed—Inside the Birth of SAME