The decision to rehabilitate Building 19 demonstrates the commitment of Wright-Patterson Air Force Base (WPAFB) to the importance of historic legacy in aviation research and development. Renovation of the building created a new Systems Integration Laboratory for the U.S. Air Force Research Laboratory, along with its industry and academic partners, to evaluate new technology of critical systems and components under flight conditions.

Located in the historic “downtown” of WPAFB, Building 19 was identified as a candidate for the United States National Register of Historic Places. Its history includes Orville Wright’s participation in commissioning one of the world’s most powerful and efficient wind tunnels. The project is an excellent example of the juxtaposition of an exterior historic rehabilitation with state of the art interior modeling and simulation technology.

The rehabilitation of Building 19 maintains its 1929 character and preserves one of the most historically significant buildings at WPAFB. When first built in 1927, Building 19 was a temporary structure. It was not until two years later, in 1929, that the wind tunnel was installed and funds became available to complete the building as we know it today.

Originally located at McCook Field, the wind tunnel was completed in 1922. One of its first assignments was the testing of the XNBL-1 Baring Bomber of 1923, then the world’s largest airplane. The tunnel provided highly successful data on performance and stability, demonstrating that wind tunnels could not only save tremendous amounts of time and money, but also potentially save test pilot’s lives. McCook Field was relocated to Wright Field (now Area B of WPAFB) and the tunnel was reassembled in Building 19 in 1929.

Once moved from McCook Field to Building 19, the completed wind tunnel was 96-ft long with the largest diameter being 12-ft. It could accommodate a test model with wing spans up to 40-in. When the tunnel was commissioned it was considered the most efficient in the world. It was well known until the late 1950s for its aerodynamic testing and contributions to aeronautical research in the development of nearly every major aircraft used by the U.S. Air Force. The wind tunnel remains a remarkable example of woodworking craftsmanship and was considered advanced for its time because of, its power, speed range, and combined features which were not available in any other single facility.

The project objectives included, preservation and reuse of the building; archival preservation, disassembly, removal and storage of the wind tunnel; and development of a new state-of-the-art laboratory facility to support the Integrated Vehicle Energy Technology (INVENT) program. Achieving these objectives required overcoming a number of challenges.

The building exterior was rehabilitated in accordance with the Secretary of Interiors Standards, including masonry, windows, and doors.

Flexibility & Growth. With the intent to use Building 19 as a fixed laboratory environment, flexibility/contingency planning was addressed in the design of infrastructure and systems that would accommodate growth and changes in systems integration simulation and modeling practices. A key feature of flexibility/contingency planning was developing the building renovation capable of accommodating the future integration and application of a research air system.

Building Historic Preservation. As a candidate for the National Register of Historic Places located within the historic downtown area of WPAFB, this building renovation required coordination with the Ohio State Historic Preservation Office to ensure the building exterior was maintained and improved to retain its historical character. The building exterior was rehabilitated in accordance with the Secretary of Interiors Standards, including masonry, windows, and doors. A new interior structural frame and mezzanine platform was designed to accommodate drivestand rooms, hi-bay research areas, test stands, shop and fabrication areas, a modeling and simulation room and observation facilities.

The entire 96-ft wind tunnel, excluding the operator’s cabin, and its primary operating elements were retained and preserved. The preservation of this historic artifact included deconstruction, removal, archiving, palletizing, and transportation of Wind Tunnel components to an off-site storage facility. The process was aided by the fact that the wind tunnel was constructed like woodworkers “stave or barrel type construction” such that each bolted section is approximately eight feet in length. An interpretive display was included within Building 19 outlining the history and significance of the Wind Tunnel. The tunnel is now being stored until a final location is found for its display.

Site investigation revealed the building columns supported by concrete piers had suffered significant structural damage over the years due to thermal stresses from the steam heating system.

Building Structure. The age, condition, deficiencies, poor soil conditions, and the need to comply with the current seismic code all became significant challenges for building restoration. Site investigation revealed the building columns supported by concrete piers had suffered significant structural damage over the years due to thermal stresses from the steam heating system. Thus, it was determined a new structural system would be required within the existing building shell.

An intricate plan was developed to excavate within the building to pour foundations as the supporting sub-structure for the new building structural frame. The new structural steel frame was tied to the existing steel frame; bringing the building into compliance with modern seismic codes. The design and construction effectively provided a means to retain the historically significant building exterior while providing the means to revitalize the interior for use as a modern state-of-the-art laboratory.

To accommodate the INVENT program, more floor area was needed than was available. The high structural bays of the building allowed program areas to be stacked, which proved beneficial. This allowed program adjacencies to be optimized, increasing efficiency. The second-floor concrete slab was also useful as a high impact cap necessary for the drivestand and pump/compressor rooms. The dense slab served as mass for sound reduction.

To take advantage of natural light provided by the high and low window bands along the north face, non-laboratory space was located on the second level at the northern end of the building. First floor high-bay laboratories, fabrication rooms and shops house much of the research being performed in the building. Research air systems, electrical bus duct distribution, process water and shop air are provided throughout the building. Actuation stands where vibration is a controlling factor are operated by hydraulic pumps located nearby.

Within the high-bay laboratories, there is an overhead system designed to provide flexibility for moving research equipment, test stands and access to utility services. The two high-bay research areas are separated by a full height wall to accommodate security considerations. Research and shop areas are located adjacent to the high-bay research labs for convenient access. The drivestand research equipment consists of two 440-hp drives and two 750-hp drives, which are housed and protected in separate rooms with direct access to the research bays. The drivestand rooms are supported by a pump and compressor room and drivestand cabinet facilities located adjacent to each other for better efficiency.

Other facilities include an electrical fabrication shop, a general metal fabrication shop, a mezzanine level control room, and a model and simulation room adjacent to the control room for the development of software for creating and updating modeling and running real-time simulations. The model and simulation room also serves as an alternate control room for independent and separate research and testing. This space is supported by a dedicated computer room for servers and drives.

Success of the newly renovated 19,000-ft2, $7.5 million Building 19 provides a new state-of-the-art laboratory, capitalizes on the sustainability of renovation over new construction, demonstrates a commitment to historic building rehabilitation, and the commitment to the archival retention of a significant historical artifact.

Steve Kimball, Esq., PMP, LEED AP BD+C, Principal and Project Manager and Andrew Glass, RA, Registered Architect, are with Emersion Design. They can be reached at steve.kimball@emersiondesign.com; and andrew.glass@emersiondesign.com. 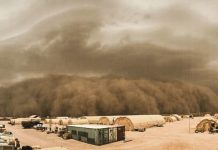 Effective Practices for Joint Use of Healthcare Facilities

Modernizing Shipyards for the Fleet of the Future

America’s Counties and the Importance of Infrastructure