Encompassing more than 5,000 individual compounds, per- and polyfluoroalkyl substances (PFAS) are able to withstand high temperatures and acidic and basic conditions, making them ideal candidates for use in manufacturing processes, such as metal electroplating. PFAS are persistent and, once released to the environment, do not readily degrade. They are also associated with adverse human health effects. Some PFAS can cause increased cholesterol, low infant birth weights, immune system effects, specific cancers, and thyroid disruption.

The Department of Defense has been proactive in identifying locations where PFAS have been used. These primarily are related to aqueous film-forming foams (AFFF), which were used in emergency response, firefighter training, and fire suppression systems. Secondary locations where PFAS may be present at military installations include landfills, wastewater treatment facilities, and chromium plating shops.

While the environmental impacts from these potential secondary source areas are not presently known, it is anticipated they will be substantially less extensive than those from AFFF, simply due to the number of locations and quantities of PFAS-containing materials handled at them. However, that does not diminish the potential risk to human health and the environment where they are found. Some states, notably Michigan and California, have recently identified chromium plating facilities as potential sources of PFAS, forecasting an increase in attention on these facilities in the future.

While the environmental impacts from these potential secondary source areas are not presently known, it is anticipated they will be substantially less extensive than those from AFFF, simply due to the number of locations and quantities of PFAS-containing materials handled at them. However, that does not diminish the potential risk to human health and the environment where they are found.

Emissions Concerns. A variety of chemical and engineering controls, such as ventilation, covers, and the addition of a fume suppressant, are used to control chromium plating emissions—although covers are less common because of the potential for hydrogen gas to accumulate underneath and because hexavalent chromium can coat the underside, creating a hazard when workers remove it. Fume suppressants control mist formation by chemically lowering the surface tension of the plating bath. As the surface tension is reduced, the bubbles produced in the bath become smaller, which are slower to rise. When they surface, they have less energy and are less likely to form a mist. The foam used on the surface of a chromium plating   bath has a characteristically yellow-orange color from entrained chromate.

Plating processes for other metals yield negligible emission levels. In fact, emission levels from other metals plating operations in uncontrolled scenarios are estimated to be comparable to controlled emissions from chromium plating and anodizing operations. As a result, fume suppressants are not commonly used and are generally not a regulatory requirement for plating other than chromium plating and chromium anodizing. However, it is possible that other materials used other plating processes, such as wetting agents, may contain PFAS.

In 2012, the Environmental Protection Agency mandated that fume suppressants containing PFOS be phased out by 2015. Newer formulations were sampled in 2019 and did not contain detectable levels of PFOS or PFOS-precursors. The active ingredient in all sampled formulations was 6:2 fluorotelomer sulfonate.

Residual Detection. The State of Michigan released a study concerning PFAS used in chromium plating in 2020—after PFOS had been phased out of fume suppressants for five years. This study found that despite the ban, PFOS was still detected in the wastewater of 10 out of 11 chromium plating facilities at concentrations ranging from 15- to 51,700-ng/L. It was concluded that residual amounts of PFOS from prior to 2015 were likely still sorbed to the piping and tanks in the facilities.

These facilities may be a secondary source for PFAS and PFOS, but should not be ignored. As the Department of Defense makes strides to clean up PFAS from AFFF sites, chromium plating facilities should also warrant a watchful eye.

Nicole Fitzgerald, Ph.D., is Environmental Specialist, James Hatton is Senior Engineer, and William DiGuiseppi, PG, M.SAME, is Principal Hydrogeologist, Jacobs Engineering. They can be reached at nikki.fitzgerald@jacobs.com; james.hatton@jacobs.com; and bill.diguiseppi@jacobs.com.

[This article first published in the January-February 2021 issue of The Military Engineer.]

Implications of the New NEPA Regulations

Focusing on the Future, Now 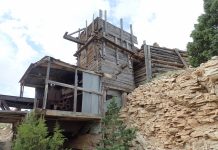 Implications of the New NEPA Regulations