Supported by the SAME International Committee, two new overseas Field Chapters were stood up in the first quarter of 2017—one in Bahrain and one in Qatar. These new Field Chapters will give deployed servicemembers and expatriates who are working in these locations a way to get connected and build enduring relationships across military, government and industry.

The chapters each held their inaugural meetings in late March. Both meetings were well attended, featured technical presentations, and celebrated the official signing of the chapter charter and unveiling of the SAME banner.

[Listen to the Real TiME Podcast with Col. Blair Schantz, USA (Ret.), to learn more about how the SAME International Committee is working to support SAME members and Posts overseas.]

The Bahrain Field Chapter held its inaugural meeting on March 30 2017. More than 18 personnel from Naval Support Activity Bahrain participated in the historic event and formal signing of the charter, establishing the Bahrain Field Chapter. Lt. j.g. Charles Bell, USN, assumed the duties of President as the chapter plank holders looked on.

The inaugural meeting featured a tour of Aluminium Bahrain (Alba) and presentation by Ahmed Shukri and Sharifa Jalil. Alba produces more than 971,000 metric tonnes per annum and ranks as one of the largest and most modern aluminum smelters in the world. Alba employs over 2,600 people and is known for its technological strength, strict environmental guidelines, and high track record for safety.

The Bahrain Field Chapter is sponsored by the SAME International Committee and assisted by Sustaining Member AECOM.

The Doha Field Chapter held their inaugural meeting on March 31, 2017. More than 33 officer and enlisted personnel from Al Udeid Air Base participated in the historic event and formal signing of the charter, establishing the SAME Doha Field Chapter. Col. John Tryon, USAF, assumed the duties of President as the chapter plank holders looked on.

You can learn more about the 1st Expeditionary Civil Engineer Group and the Doha Field Chapter during their presentation at the 2017 SAME Joint Engineer Training Conference, May 23-25 in Columbus, Ohio.

The Doha Field Chapter is sponsored by the SAME International Committee and assisted by Sustaining Member AECOM. 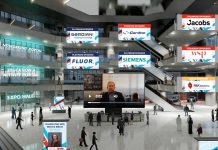 Connections are Golden at #SAMESBC18