Day three of the 2016 JETC in Phoenix kicked off with the annual Society Leadership & Post Awards Breakfast, recognizing the incredible work of SAME’s 105 Posts, 15 Committees & Councils, and 30,000 members around the world. SAME national officers, Jane Penny (President) and Sal Nodjomian and Kurt Ubbelohde (Vice Presidents) emceed the event, which started bright and early at 7:15 in the morning!

Representatives from each of SAME’s 17 Regions paraded on stage to be recognized, and that was then followed by honoring the Top Posts for 2015: the Cape Fear Post (Top Small Post); Virginia Peninsula Post (Top Medium Post); and Houston-Galveston Post (Top Large Post). The TEXOMA Region also was recognized as the Top Region.

After the breakfast, the day three schedule opened up with Exhibit Hall hours as well as concurrent education sessions on topics as diverse as bioremediation at a National Priorities List site, design-build delivery for military projects, building envelope commissioning, cyber security trends for critical infrastructure, and the conclusion of the Total Joint Force Table Top Exercise, which brought together some 50 participants from across the military services and the contracting arena for a multi-faceted training exercise that is designed to help better understand and communicate the capabilities of the joint engineer force and where there may be gaps that need to be addressed.

Capt. Blount, an SAME member since 1984, served this past year as President-Elect. Among his many leadership positions, he has served as Chair of the Energy & Sustainability Committee, Co-Chair of the Federal Project Delivery Symposium, South Atlantic Regional Vice President, and Jacksonville Post President. Capt. Blount was invested in the Academy of Fellows in 2012. He served 26 years in the Navy Civil Engineer Corps, including command tours as Commodore of the 30th Naval Construction Regiment, and Commanding Officer of NAVFAC Southeast.

After retiring from the Navy in 2008, Capt. Blount joined Balfour Beatty Construction, and this spring, he joined AECOM as Vice President of Navy Programs. A graduate of the University of Florida, where he earned a bachelor’s in Environmental Engineering, Capt. Blount also holds an master’s in Environmental Engineering from Georgia Tech and a professional degree in Water Resources from The George Washington University.

The 2016 JETC will conclude with the annual Society Ball & Awards Gala Thursday evening. Congratulations to this year’s award recipients! For more information on the 2016 SAME JETC, visit www.same.org/jetc. Follow the event on twitter @same_hq and #SAMEJETC.

* Lists include all honorees; not all awards & medals are being presented at JETC.

SAME Foundation: Paying it Forward in Our Second Century 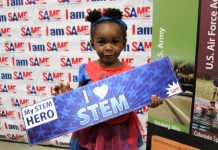