At the last U.S. Navy base in New England with deploying ships or submarines, decades of dwindling resources and constrained shore infrastructure budgets had led to a decline in on-site generation capabilities. Steam turbines had been abandoned in place long ago, and the last remaining generating asset, a 23-year-old natural gas fired turbine engine, was reaching the end of its service life. Covering nearly 700-acres alongside the Thames River in Connecticut, Naval Submarine Base New London has been very forward looking in tracking local energy security efforts against the Navy’s improving guidance and has been working to enhance on-site resiliency in parallel with the development of requirements and guidelines.

Recognizing that direct investment was likely not a viable solution toward recapitalizing this power plant, base leadership, along with facilities and energy management personnel, sought other avenues to address these needs.

After the last round of Base Realignment and Closure, the State of Connecticut put together a $40 million bond program for investment in its military installations. Understanding the strategic importance of microgrid capabilities, a portion of these funds were set aside for the development of a microgrid design at Submarine Base New London, which was completed with Burns & McDonnell in 2017.

In 2018, the base signed an enhanced use lease (EUL) with the Connecticut Municipal Electrical Energy Cooperative, supported by the local utility provider and the Navy’s Resilient Energy Program Office. In allowing a government agency to lease underutilized real estate in exchange for in-kind consideration, the EUL addresses a portion of the energy security requirements that were lacking.

Leveraging emerging technology from a Connecticut manufacturer, Fuel Cell Energy, the project included the construction of dual fuel cell generation assets capable of producing 7.4-MW within the installation fence line. These fuel cells would normally provide energy to the utility for commercial resale, but under the lease terms they would provide power directly to Submarine Base New London in the event of an emergency. Furthermore, Connecticut Municipal Electrical Energy Cooperative would provide a portion of the value of a microgrid system as payment for the use of the land.

Additionally, the base and the local utility partnered with the state and the Department of Energy and the Environmental Protection Agency to put together a request through the Microgrid Grant and Loan Program. A grant valued at $5.2 million was subsequently approved to support the original design and to enhance the system.

The Department of the Navy, recognizing the national security interests associated with not having the energy systems necessary to complete its missions, has been working toward developing a comprehensive energy program to address energy security. To further this effort, baseline criteria for resilient and redundant energy systems were developed in the Navy’s Energy Security Framework in 2017.

In 2018, creation of Installation Energy Plans began across the Department of Defense. These plans document energy security gaps and potential plans for mitigation and a system of evaluation across the enterprise for prioritizing those gaps in the Energy Mission Integration Group.

Then in February 2020, a comprehensive Energy Resilience Strategy was published by the Navy that lays out consistent goals to ensure mission assurance through energy security.

While the EUL and grant supported efforts to increase resiliency, they did not fulfill the requirements of the base entirely. The final approach to solving the energy security needs was to utilize a financed energy project to invest in the power plant.

Financed energy projects use energy savings achieved throughout the project lifecycle to invest in the upgrades. In this case, an energy savings performance contract (ESPC) was chosen, which was awarded to NORESCO in 2019. The project focused on energy efficiency and on-site generation, ultimately resulting in upgrades to the existing energy management control system, improvements to the base’s steam infrastructure, energy efficient lighting, and a recapitalization of the mostly abandoned power plant equipment.

The ESPC will remove the current turbine and replace it with two natural gas reciprocating engines each capable of producing 5.375-MW. It also will install a 40,000-lb/hr steam boiler and two heat recovery steam generators capable of producing 12,000-lb/hr of steam each. The excess savings generated from the contract allows for further investment in the microgrid.

In order to tie these three separate efforts together, a modification is underway to the ESPC that will leverage the construction owner of the microgrid to include all cybersecurity requirements. Energy and utility managers often indicate that the threat keeping them awake at night is cyberattacks targeted at energy and utility systems. In order to safeguard against these threats, not only must cyber defenses be designed and built into these systems, they must be continuously scanned and patched as emerging threats are identified.

Additionally, to further ensure the performance and reliability of the resilient generation, long-term maintenance and operations support personnel will provide repair and replacement responsibility for 18 years after construction. These resources also will cross-train with base staff so that the Navy will develop the expertise needed to operate the new system and continually support the cybersecurity aspects over the long term.

By leveraging three distinct avenues of funding and contracting, more than $100 million in capital investment was secured with no upfront costs or budget increases for the Navy (the fuel cells are financed by Connecticut Municipal Electrical Energy Cooperative through retail electric sale, and NORESCO will finance the ESPC and microgrid investments entirely through nearly $7 million in annual savings).

These combined efforts will place over 18-MW of generation on base, deploy an advanced cyber-secure microgrid, and reduce energy consumption and greenhouse gas emissions.

To achieve this level of integration requires collaboration and partnership from all stakeholders, and it has taken over five years of development efforts from initial concept through execution. The fuel cell project is expected to come online by March 2021, and the combined heat and power and microgrid projects are expected to be completed by December 2022. By 2023, Submarine Base New London is expected to once again have all the energy and thermal capacity required to power its mission loads with a state-of-the-art microgrid to control those assets in times of crisis.

The next steps for the base include development and expansion of the cyber-secure control system and further investment into the steam distribution systems to recapitalize aging piping. While the journey to energy resiliency has been long, and at times arduous, the final product will have been well worth the effort.

[This article first published in the March-April 2021 issue of The Military Engineer.]

Building an Operating Platform in the Western Pacific

The Value of Design-Build in Remote Locations 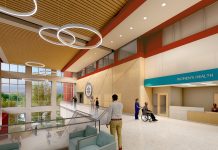 Streamlining the Delivery of Radiological Remediation

Lessons Learned from the Shiplift Expansion at Coast Guard Yard

A Meaningful Investment for the “Arctic Warriors”