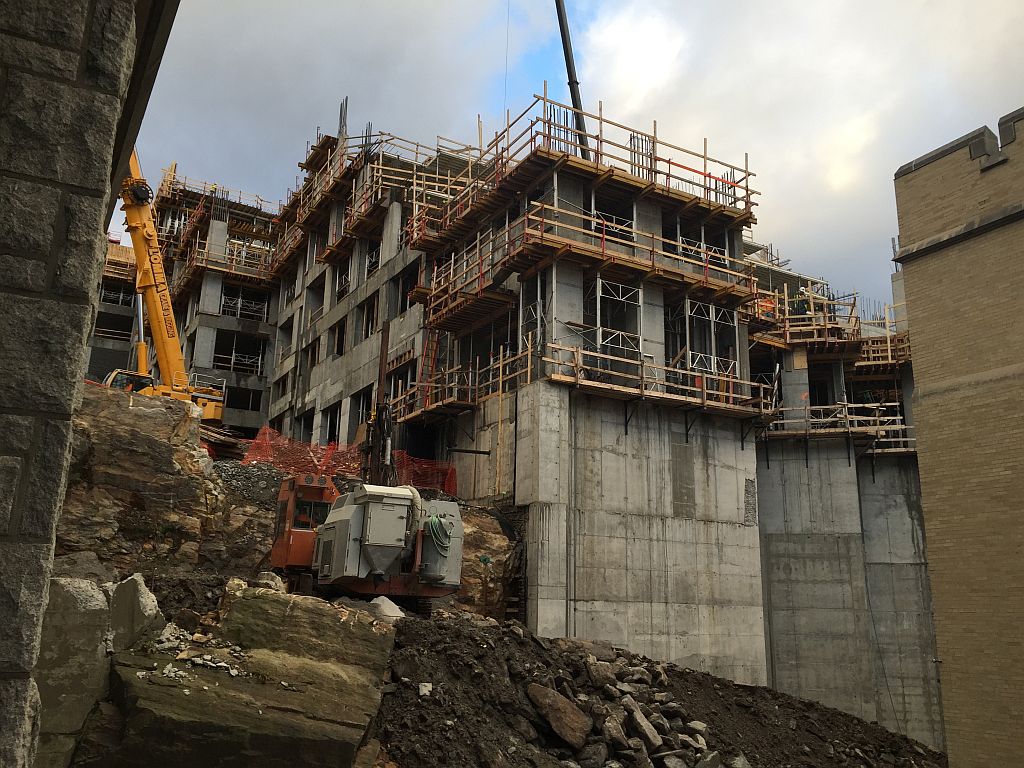 In May 2017, construction was completed on the General Benjamin O. Davis Jr. Barracks in the center of the U.S. Military Academy, the first new barracks built at West Point in 50 years.

The project was led by New York District of the U.S. Army Corps of Engineers along with Walsh Construction, design partner Clark Nexsen Inc., and a host of subcontractors and service providers.

In its appearance, one will find a structure that maintains the academy’s famed gothic architectural style while incorporating modern technology. The challenges that came in constructing this 287,000-ft² six-floor building are nowhere to be seen in the finished product. The barracks, which houses 650 cadets, includes the first-ever chiller plant to provide air conditioning to any barracks at the academy, and has achieved LEED Silver status. Additionally, the design considers academic instruction by making most systems available for the cadets to observe and study as part of their engineering courses.

Some 50 years after the last barracks was built at West Point, the total cadet population had grown almost 30 percent, with no significant increase in housing space or accommodations. This need drove planning of the Davis Barracks, which would need to be a modern facility that would improve the quality of life for cadets, blend in with the surrounding buildings, comply with National Historic Landmark standards, and offer 21st century technologies, all while not disrupting cadet life or public views.

Located on the side of a mountain and adjacent to a National Landmark of American Revolution fame, the project site posed several logistical challenges. A total of 285,000-T of granite had to be removed for the building foundations and utilities.

During the nearly two years of site preparation, Walsh Construction removed almost 60-ft of granite from the confined mountaintop site— a labor intensive and time-consuming process that was complicated further by having to balance the inflow of machinery with the outflow of debris.

Additionally, the more than 25,000-yd³ of concrete poured for the building’s foundation required precise heavy equipment traffic planning and concrete pouring schedules to minimize disruptions to the academy’s operations. The barracks’ immense facade consists of 167,901 pieces of granite stone. Each stone was individually cut, labeled, shipped, staged and hand-set into a specific location.

The 121,000,000-lb granite jigsaw puzzle also presented unique staging and coordination challenges. Solving these many challenges ultimately paid off, however, as the completed building blends beautifully with the surrounding architecture like it has been there for centuries.

Behind the granite facade are significant energy efficiency and innovative technologies that will help reduce operating costs more than $44,000 per year. These technologies include radiant heating and cooling systems, solar thermal panels that heat 30 percent of the building’s water, day-lighting technology, and the use of energy efficient lighting and controls.

To help maximize efficiency and minimize operational costs, the building’s automation system receives occupancy signals from the lighting control system, which sends signals to the HVAC to adjust the room’s set points. Although radiant heating is not new, the radiant cooling system is a newer technology, leveraging its in-house chiller plant to cool water for the plastic tubes in the floor. This climate control is both energy efficient and provides occupant comfort. In the winter months, hot water is pumped through these same in-floor tubes for heating.

Together Walsh, AEG, and the design-build team, achieved several innovative updates to the lighting and lighting controls package: increased energy savings on the linear fluorescent system by 12.5 percent; increased the fluorescent system life (from 20,000 hours to 84,000 hours); reduced energy and operations and maintenance costs by changing the flood-lights on the building facade from 9,000-hour Metal Halide light fixture to 50,000-hour LED; reduced the energy consumption from the basis of design of the LED down lights by 22 percent, while maintaining the lumen output levels; executed the LED fixture updates to next generation technology maximizing the energy efficiency improvements; improved the custom light fixture design with mechanical lens support brackets for durability; eliminated the potential corrosion and rust damage to the granite with non-metallic back boxes for the LED step lights; and ensured Buy American Act product compliance.

While Davis Barracks represents a great achievement in firsts, it also epitomizes what can be achieved with great vision and perseverance—appropriate given the challenges its namesake overcame, from graduating 36th in his West Point class of 276 cadets in 1932 despite enduring significant isolation and bigotry, to leading the Tuskegee Airmen Fighter Squadron during World War II, and ultimately rising to become the first African-American general in the U.S. Air Force. Benjamin Davis Jr., the son of the first African-American general in the U.S. Army, Benjamin Davis Sr., never let social or professional alienation deter him. He continued to serve his country until his death in 2002.

FROM PAST TO FUTURE

The Davis Barracks project at West Point was a high-tech engineering demonstration of what can be achieved despite a confined, historically sensitive, and around-the-clock active environment.

The new barracks will provide West Point cadets a modern living space that supports the academy’s mission to educate, train, and inspire. And through its name, the new building recognizes a great leader of our nation who was formed in this “Rockbound Highland Home.” Gen. Benjamin Davis Jr., we salute you.

[Article first published in the November-December 2017 issue of The Military Engineer.]

Applying the Expeditionary Mindset to the Water Industry

Mitigating Munitions and Explosives of Concern in Guam

Bringing BIM and Builder SMS Together