Situated in the Pacific Ocean, just west of the International Dateline, between Hawaii and Japan, is a 2.81-mi2 coral atoll that is crucial to our nation’s defense. Despite its small size and remote location, Wake Island boasts a 120-year history of strategic importance to the U.S. military and is the site of the valiantly fought Battle of Wake Island during World War II.

An unorganized and unincorporated territory of the United States, Wake Island has been managed by various government entities, including the U.S. Navy, U.S. Army, U.S. Air Force, and the Civil Aeronautics Administration (Federal Aviation Administration).

Though the island has had many additive missions over the years, its original purpose as a transpacific aircraft fueling and maintenance depot has remained steadfast. Its 9,800-ft runway is the longest strategic runway in the Pacific Islands.

Today, the atoll is an Air Force installation known as Wake Island Airfield, managed from Joint Base Elmendorf-Richardson in Alaska by the Pacific Regional Support Center, which provides Arctic and Pacific surveillance weapon system and installation support services through base operation and support execution. Since assuming responsibility in 2010, the Pacific Regional Support Center has evaluated, planned, and executed a sizeable construction and environmental program on Wake Island.

Few are very familiar with Wake Island, which is considered one of the most remote places on Earth. But for civilian contractors whose steel-toe boots set foot on this World War II battlefield (and designated National Historic Landmark), not a day goes by on Wake Island without bearing witness to the decades-old bunkers, trenches, gun emplacements, and anti-aircraft gunnery scattered around the landscape of today’s base operations.

Tucked into a small cove by the lagoon is 98 Rock, a humbling memorial to the 98 American civilian contractor prisoners of war who were executed by the Japanese in 1943 after they had been commandeered to rebuild the airstrip destroyed during the Battle of Wake Island. In a final heroic act, one of the 98 men escaped just long enough to permanently etch “98 US PW” into the coral rock, before he was recaptured and then became the last of the men to be executed. Abandoned in place, these somber relics all are a constant reminder of a long-ago hard-fought war.

Wake Island’s history with the United States dates back to 1899, when it was first claimed through an Executive Order issued by President William McKinley. The atoll then was uninhabited and remained so until 1935-1936, when Pan American Airways established a runway, refueling and maintenance operations, and a 48-room hotel to expand its flight offerings across the Pacific. In October 1936, Wake Island welcomed the first Pan Am airplane onto its airstrip, marking the start of what would be Wake Island’s core role for decades.

At that time, President Franklin Roosevelt had put Wake Island under the administration of the Navy in response to concerns over Japanese expansionism. Pan Am operations served as suitable cover for the Navy, which a few years later, began to build infrastructure on the island to project air power across the Pacific. In 1941, at the start of U.S. involvement in World War II, Pan Am’s commercial operations at Wake Island ended and control fell to the Japanese until its surrender in 1945. The Navy then resumed control for another two years.

Aircraft landings on Wake Island increased significantly after the war, with the Civil Aeronautics Administration put in charge of runway operations in 1947. By then, a few hundred families of all nationalities had been recruited to move there in support of aircraft operations. At the height of the Korean War, 120 military aircraft were refueling daily on Wake Island. Both commercial and military flights continued to land through the Vietnam War, until the early 1970s when technological advances enabled flight across the Pacific without the need to refuel.

The Air Force assumed control in 1973 and Wake Island was reestablished as a launch site for testing new defensive systems against intercontinental ballistic missiles. As U.S. foreign policy began to focus away from the Pacific, the atoll soon became a forgotten land with bare-bones operations. By the turn of the 21st century, its population had dropped to a historic low of three people.

Today, Wake Island once again serves as critical ground for military training and missile testing, while continuing to be a “Pacific airbridge” providing refueling and maintenance services on an emergency basis to military and commercial aircraft.

Operations began to resurge in the early 2000s, when U.S. foreign policy took a “Pivot to the Pacific.” This renewal in Wake Island’s strategic importance led the 611th Civil Engineer Squadron to secure $155 million in funding for sustainment, restoration, and modernization projects. Funding was first spent conducting evaluations, assessments, and inventories of infrastructure and facilities. Design-bid-build contracts followed, issued through the Air Force Civil Engineer Center and the Alaska District of the U.S. Army Corps of Engineers.

A UNIQUE SETTING
Located in the western North Pacific Ocean, nearly 1,500-mi east of Guam and 2,300-mi west of Honolulu, Wake Island is a designated National Wildlife Refuge and part of the Pacific Remote Islands National Monument. The diversity of wildlife present makes the roughly 100 civilian contractors and Air Force personnel who live and work on the atoll hardly its sole inhabitants. Millions of migratory and other birds dwell within Wake Island’s terrestrial folds, while abundant and diverse sea life swim in the coral reefs of its submerged lands and waters. There is no other Air Force installation quite like it in the world.

Since 2009, approximately 100 civilian contractors have resided on Wake Island to perform work under the Sustainment, Restoration, and Modernization Program.

Not surprisingly, a multi-decade lull in operations had taken its toll on an island once home to a few thousand people during peak activity. Tropical storms had washed away buildings, leaving behind remnants of their foundations. Termites infested walls. And the atoll’s tropical marine environment led to the rusting and further degradation of facilities.

The backlog of sustainment, restoration, and modernization projects programmed by the 611th Civil Engineer Squadron calls for defense contractors with expert logistics experience, problem-solving skills, and resourcefulness given the island’s geography and history, and unique construction challenges.

Changed conditions. Time lapses between 100 percent design packages and construction execution could be as long as one year, resulting in climate-driven changed conditions that require design updates. Wake Island experiences a sub-tropical climate with much higher precipitation amounts during summer and typhoons also are liable to pass over.

Remote Location. Wake Island sits in the middle of the world’s largest body of water, with no immediate access to materials, parts, supplies, or heavy equipment. Barging equipment and supplies to the island requires at least eight weeks of long lead planning plus two months of transport by sea. Projects include a 15 percent to 20 percent contingency for materials, parts, and supplies.

Historic challenges. Due to the age of buildings on Wake Island, construction drawings are not always available or accurate, requiring frequent problem-solving and design alterations on the fly.

Throughout its military history, Wake Island has served principally as an aircraft refueling depot. But in 1975, the atoll took on a special mission. Upon the fall of Saigon to North Vietnamese forces at the end of the Vietnam War, Wake Island became a processing center for Vietnamese evacuees. Military engineers, tasked with resurrecting buildings and providing housing for evacuees and U.S. personnel, were among the servicemembers brought in to provide support. During “Operation New Life” the island temporarily housed nearly 10,000 Vietnamese. By the end of the mission in November 1975, upwards of 15,000 of the more than 100,000 Vietnamese evacuees had been processed on Wake Island. Many of the others were sent to Guam.

With a long track record of successfully performing military construction and environmental work in Alaska, another locale that demands significant planning and logistics expertise, Brice Environmental Services was one of the first contractors to make headway on the Air Force’s sizeable portfolio of projects in Wake Island.

Relationships matter when executing contracts for any client. But developing trust between contractor and owner is even more crucial when the work is complex, the location is distant, and the stakes are high. Wake Island is very unique and extremely remote. And, despite its small size, it is critically important to our nation’s security.In the last three years, Brice, as both a prime and subcontractor, has completed upgrades to much of the installation’s infrastructure, including water and power lines, and handled the removal, transport and disposal of more than 3,000-T of legacy solid waste. Its performance has led to it becoming a go-to resource for the Air Force on the atoll.

[This article first published in the September-October 2019 issue of The Military Engineer.] 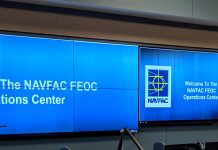 The Art of Restoration: Saving the U.S. Capitol Dome